Hi everyone! How are you today? I hope you’re well 💝. I took the opportunity to type this post out on a morning that felt very much like Spring had arrived….and then it started to rain so I scrapped it 😔🌧️ (I have a low level of tolerance these days 😂). When I came back I turned the whole thought process around and decided I won’t give up on this post! Instead I’ll allow that one morning of sunshine to be enough for me to throw the towel in and OVER Winter (I basically gave up on something else in the end ❄️😂).

The season is done for in my eyes. It may come as no surprise to regular readers because it has been a top subject for a while but right now I’m taking back the power by saying goodbye to it 👋. Dramatics aside, this post was not on the agenda today, in fact it was nowhere near it!

I have been debating whether or not it’s even worth revisiting my Winter bucket list because the more and more I tried to think of things to say, the words never came. That is until I stopped trying 😂. I think a good thing to do when you’re not in the mood for writing a post or anything really is to work on something else and then you’ll feel compelled to go back to that first thing 😌.

Most importantly, I know I’d regret it if I didn’t somewhat close of this chapter before moving onto the next one because I’m really looking forward to Spring and thereafter 🌞. I don’t want a part of me to get left behind trying to conjure up stuff to say when it’s best if not forced. I’mma write from the heart and be honest, I can’t remember a lot but I guess that was just a shutdown from the year moving into this one (winter is weird how it gets to be a part of 2 years 😵). Let’s dive deep into what I wanted out of the season and what I got 😬:

My options have become a lot more limited since I set out with this goal 😅 but I did eat food so goal complete! (Couldn’t lose with that one 😏😂). I have found some of the foods that are good for me and don’t cause adverse effects with flare-ups which is great!! Beforehand I thought I knew all that I could and couldn’t have but now I’m becoming much more aware of other possibilities and substitutes 🥔.

Amongst other things, sugar isn’t on the cards and must be avoided (I’m doing surprisingly well with this but I guess it’s like the no cheese thing, if you know the pain you can get then you don’t wanna put yourself through that no matter how tempting it may be 🙌). Mistakes get made but only because I’m human 😊😂.

Not all replacements taste as delicious as the real deal but it’s a learning curve. Throughout Winter I got to try loads of different meals that brought me back to those days when we could eat out yet they were made at home and didn’t have anything that would get to me so it was a win/win situation 🤣.

It’s not massively tricky to find stuff that you want and have it be appetizing at the same time but everyday is different so loads of options are needed. I don’t want to overdo one thing and leave a foodie phase that could have been spaced out! 🥕 Otherwise I’m just further limiting myself in having to think of ideas that aren’t out there/available yet to cater for my needs. At the end of the day I don’t wanna eat samey samey stuff all of the time so I’m keeping open-minded about what is out there, doesn’t contain the things I cannot have and tastes GOOOOD 😋😂.

Have fun with festivities 🎁

This was probably what went well the most out of all on this list! 😂🎄 I thoroughly enjoyed myself in the leadup to Christmas regarding everything festive and most of it got written about in my December Favourite’s! There was a load of gingerbread in various forms, a pantomime and an overall sense of magic hung in the air that is sought after and I thought would pass by after the year we had. It didn’t and for that I’m left with some beautiful memories that I’ll never forget! ⭐

I made a Spring wreath for our front door a few weeks ago! 🌻 There was a Christmas one before that but I’m not sure if it was put together in Winter 🤔…..we’ll say it was anyway! (Oh Lucy, how creative you’ve been 😅😂). I’d been meaning to replace the festive apparel on our front door so when the Spring workshop sprung up from the floristry school I am with it felt like it was meant to be! 💫 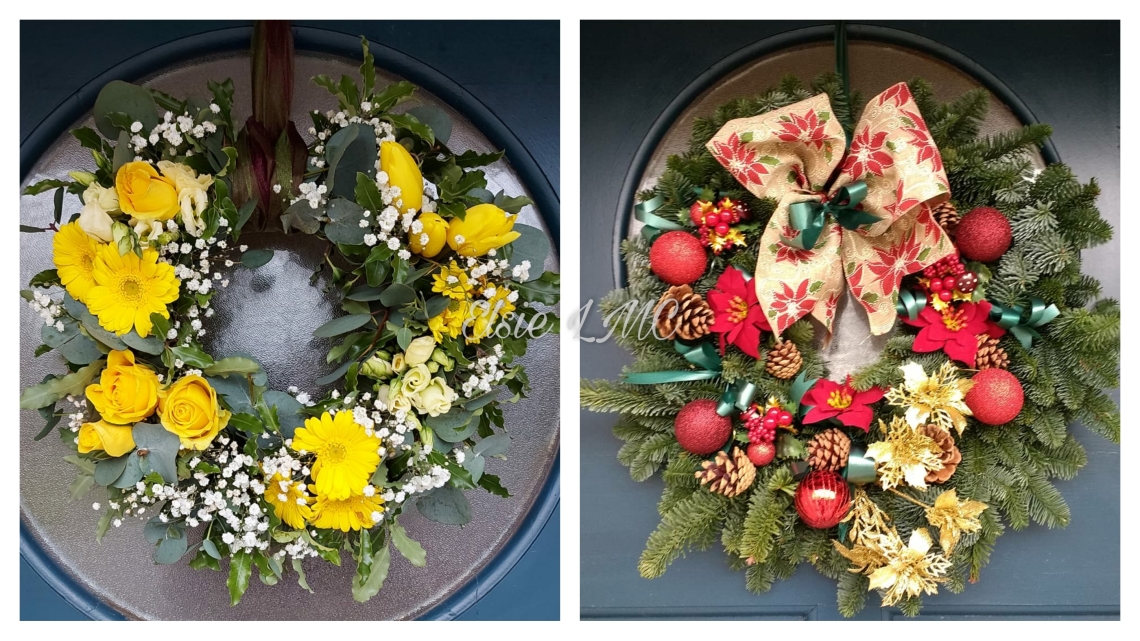 I won’t lie, it was a lot more tough going than previous crafts of that nature because of my hands playing up but I’m pleased to have gotten something I set out to do done! 👏 It’s so windy outside lately, I wouldn’t be surprised if a lot of the foliage has taken off but ah well 😑😂.

I also designed a vase on Pottery.ly to see what it was like which may or may not count as a craft but it had me all creative! 🎨 I got bored and deleted the app afterwards but here’s the masterpiece anyway:

For a first attempt I don’t think it’s bad! (I might just get the app again because I want to have a look around and see what people who have used it for ages have done! 😮). How come implications of ocean waves spring to mind when I try to empty it for artsy inspiration pulling purposes? 🌊 Nevertheless I just go with it 😂🏄.

Get better at planning for my bujo earlier 🎨

Ahaha well this is awkward because as you may already know, I’ve put bullet journalling on hold 🙈. I announced it in this post where I chatted about why I decided to switch over to using planners/diaries instead. This is exactly what I mean when I say that the opposite happens when I want for something to happen bucket list-wise 🙄 I drew attention the area and it literally caved in 💥😂. I don’t plan on getting back into journalling again, it feels like the right decision was made although it is strange looking back at this goal and remembering how I had a completely different perception of the whole thing 😵.

Try to do something meaningful everyday ⚡ // Embark on new ventures 🌌 // Have fun! 🎆

I’ve found that throughout Winter and perhaps this recent time of lockdown I have been more open to starting things I would have most definitely put to a side before! It’s like things have happened that made me realize you only live once and that emotion can at times be stronger in some moments than others but I get the gist of it and have carried that into everyday.

Even when I can’t move or get about the place I try to maintain a positive outlook and if I’m not feeling it then I accept that and don’t force (because then it most definitely won’t wanna hang around 😂). Moods can be up and down, sometimes favouring one end more than the other. Strength can be found in both.

I have learnt a lot a lot about myself and also things that are outside of me, be it through a screen taking in nuggets of information or by finding ways to keep sane like by bringing the outdoors in and creating an indoors veggie scene that is growing weekly with new additions 🌱 (I’m very excited about it!! Tis a similar joy I get from my succulent plants. There’s something special about nature and it’s nice have a part to play in its story).

In terms of meaningfulness it varies from day to day but even the simplest of acts can bring about a change within or out there 🌍 (taking time for yourself can also impact those around you in a way ✨). I tried new things and in turn see things differently too. I’ve learned how not to do things and vice versa. Above all, in amongst the craziness and days where it felt like I was back in bed way too soon (time is a real concept I tell you) I did have fun! 🙃💫

Thanks for reading guys! 😄 Are you with me on wanting to see the back of Winter or no? Is it sunny where you are? I’ll try not to be jealous but the feeling is overpowering 😅😂. We need more of those bright days where things just instantaneously lift! Channel and send them my way, yeah? 😂 I’ll refrain from posting my spring bucket list until I’m sure the season has arrived and it isn’t just a hallucination 🌞. Take care, stay safe and have a lovely day (a bit of “light” homework there 😌😂). I’ll see you very soon! ✨💕