Greetings! 🖖😂 It’s time for the grand finale that always takes place in memory of a previous month 🥁😯 my FAVOURITE’S! (…..I made it sound much more fancy than it actually is 😌😂). It really does feel like these posts end a chapter whether I’m ready to move on or not, that’s time for ya! 😔😂 How are you doing? 💕 Is it just me or did July feel noticably productive? ✨ Maybe I should acknowledge that it might have come from within and not let the month take all the credit? Yeah I like the sound of that 😏😂.

In the month that I became a Libra (which I’m mildly upset about because I had a fondness for being a scorpion so needless to say, I’m staying put! 😧), I got out to shops for the first time since March 😲, worked my way through a good few “sharing” bars of smarties and ran out of space writing this post in my journal so in the end had to whittle it down to what you’re seeing today! 🙃 Sit back, relax and…actually, stand up, go get a nice cold drink and then sit back where you were. Wait, you already had one? You’ve wasted your time, not mine 🙄 and I’ll take that drink 🍹. Feeling quite refreshed I’m ready to get this post going 😜 Let’s start with…

A fantastic time was had and she loved the poem I wrote her too which I’m very happy about as I got a bit nervous at the last minute that it was stupid until she cried and I was like THAT is what I wanted to see 😂💕. Mum had a great time and she truly deserves it so it was nice to see her being spoilt. Everyone enjoyed the bouncy castle assault course too and we were all up on it like kids every now and then, even with there being a fair amount of rain around that time as there were spates when it dried up and we were out there having fun in the sun! 🏰🌞.

It felt like we were on holiday (which was a welcome feeling after being cooped up at home!) whenever we were out there or looked out of the window at it so it was a nice sight to see and experience to have in the garden ✨. The day was full of bits and pieces like a Ben & Jerry’s cake, a Domino’s takeaway and a load of laughs, it won’t be forgotten anytime soon….not by me anyway as its set a tone for what to expect on future birthdays 😏😂 I’m just joking, we went all out because mum works so hard and deserved a treat so I’m glad that could be done for her and it is a nice memory to have now ✨.

On my first trip to a shop since March we got a badminton kit and played that which was a lot of fun! You never know there’s a breeze outside on these hot days until you hit the shuttlecock and it goes way off into the distance (after a while it stopped being my turn to go get it cause I just like the playing part 😂).

I’m so happy that I finally got some Jeff Lynne/ELO merch as I LOVE them! Merchbar accidentally sent me out a keyring instead of an enamel pin but after hearing of this I received a discount and am waiting until I can think of other things to get so that delivery is worth it (it will most likely be some Christmas gifts I have in mind for family 😏🎄). The two tops I ordered fit perfectly and I’m glad I got the next size up as they’ll probably shrink down in the wash too 😂.

I watched Sweet Magnolias and really enjoyed it! I think it was on TV on a Sunday morning and I’m glad I catched it because I’m known for the odd lay-in or two 😴. It was a heartwarming and at times emotional watch and I’m glad I caught it from the beginning to the end to see those friendships progress and lives change. If you haven’t seen Sweet Magnolias then I’d truly recommend it!

Has anyone seen the musical? I’d love to know what that’s like in comparison although I would probably never get to see it 😭…..not trying to be dramatic with that crazy crying emoji, it won’t let me find one that’s a bit less upset as there are those moments in-between sadness where you’re not full on crybaby but still feel an element of it and yet there is no emoji to express it (surely there was one once, wasn’t there? 🤔). I’ll have to settle for that when I only wanted an ounce of drama but there you go, can’t have everything 😂.

In July I made a Cheesecake and vegetable fritters! I’ve actually lost track of everything that’s been thrown together via video call since isolation set in 😵. They take place once a week but twice last month I was unwell on the days we’d planned so I didn’t get to make pastries or muffins, my sister did!

Like I told you before on the post that features in my next favourite on this list, I did not actually get to eat the cheesecake as we couldn’t find a dairy substitute at the time but my dad enjoyed it so nothing went to waste! I can remember enjoying the vegetable fritters but I was more entranced by the Bubble and Squeak that my mum made that same day which was very yummy + filling (especially on hot buttered toast 🤤) so somebody else ended up enjoying them but the baking through video with family was fun nonetheless! (Still called the fritters a bake even though for the most part they were fried because we finished them off in the oven as wanted to be sure they were fully cooked before tucking in!).

Things I did mindfully 🍃

You can read all about that HERE! It might even become a series like I planned because I started writing one for Tuesday so it just depends whether or not I publish it in time or something else beats it to the finish line. I really like the idea of paying homage to what gets done in a mindful way, especially simple tasks you’d do anyway and wouldn’t normally associate with being more present in the moment so it’s definitely made me take notice of what I can get calming effects out of doing 💫.

Some more posts from July that I’m quite pleased with are: 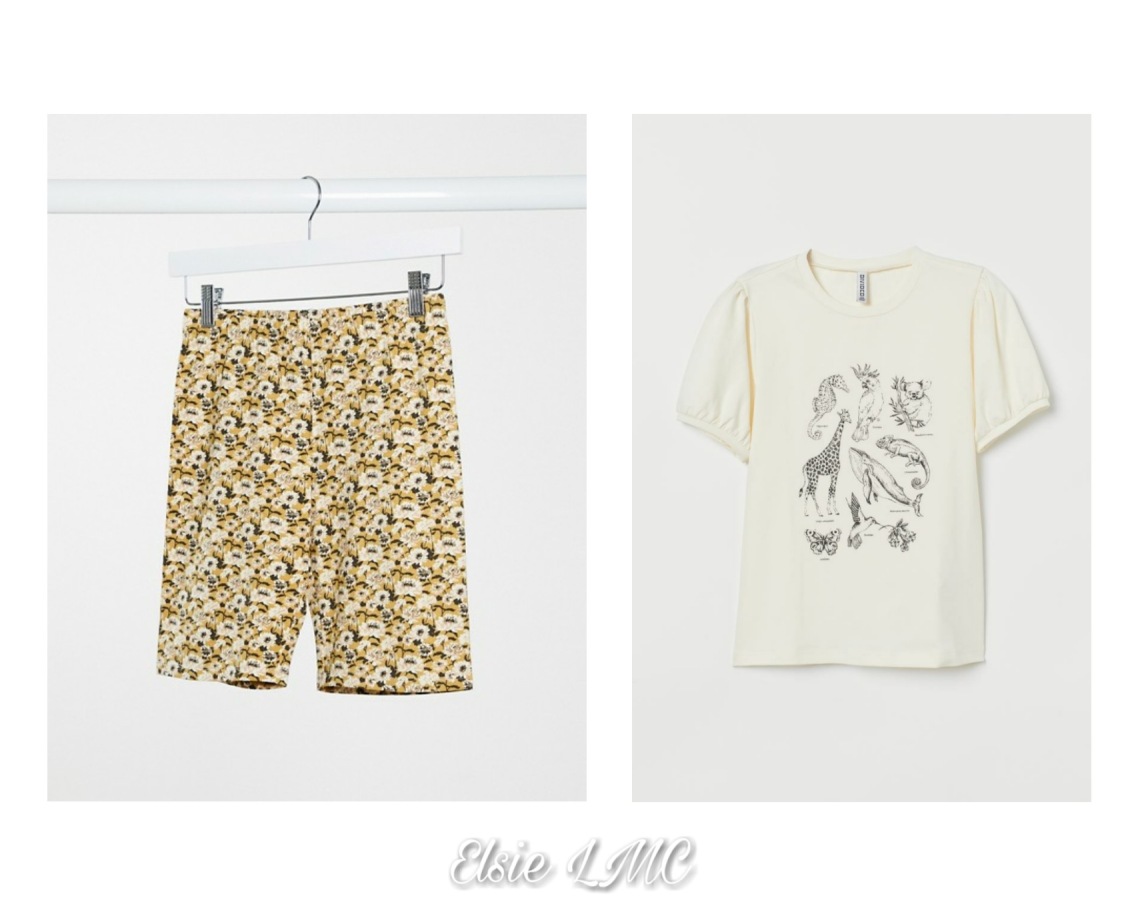 I’ve wanted biker shorts for some time so these ditsy print ones by brave souls are a welcome addition to my wardrobe! 🌻 I also got a top with sketches of animals on it by H&M *goes off on a hunt to find a picture of them so if you see it above then RESULT 🤣😂*. I really like how the top had puffed sleeves and the print is kinda textbook style so it looks fancy and I could stare at it all day (not whilst I’m wearing it tho, might get neck cramps 😂).

Upping my insta game (through just giving it a go really 😂)

On my bullet journal August spread post I mentioned that I’ve switched up my content over on Instagram!! It’s now a bullet journal/bookish space and I really like it so let’s hope it’s just not another passing phase 😅 (they seem to like coming my way 😂). I love how Instagram is just another place for you to see snippets of someone’s life and I’ve been drawn to looking up photos of succulents lately because I recently became a plant parent 😊.

They only arrived the other day but to say I’m attached is an understatement! They are not (and I repeat NOT) going to die because I don’t know if I could deal with that when I’m actually putting in the effort this time for things to work out in my favor 😌. They are super cute and I can’t wait for you to meet them! (Don’t know if I can wait until my next favourites post to show you so maybe I can do an early stages introduction to them and then you can be as surprised as I am if anything happens in the future 😂🌵).

We visited this farm shop and I absolutely loved how rustic and cozy it was!! ✨ The part that had all of the bread + cookies and stuff felt like a Hobbit hole/bakery which is just the ideal combination in terms of a happy place so I was pretty content just standing there (if you had to go run errands you know where you could leave me and I’d STAY 😂). I love how all of the produce is Irish made and amongst others things I got some tasty hummus that went really well with chilli crackers 😋.

On a more recent trip to this place it dawned on me that there are a few shortcomings in terms of what they could be doing different considering everything that’s going on right now but I still like them as I’m of a forgiving nature 😇😂.

McDonald’s I missed you 😭

They say that you don’t know how much you love something (or “someone” but details shmetails 🙄😂) until it’s gone but to be honest my love for McDonald’s has always been particularly strong ngl 😂. It often varies between them and KFC but the safety precautions put into the latter of the two given the current circumstances we live in are scarce to put it lightly and by choice as well (at my local anyway) so I’m not their biggest fan right now.

But anyway back to the real deal, I love McDonald’s and don’t even care that I can’t have cheese because their burgers still taste fabulous without it! 🙌😍. You gotta love it when you don’t feel like you’re missing out, in this sense they lookout for the people by just purely being themselves and it all tastes so GOOD…..and now I’m rambling on but that’s just how food makes me feel so I refuse to apologise ✌️😂.

And that’s that! 😌 I feel like I missed out a lot of things but I shared what I felt truly made the month what it was and so yeah, yay to that! 😂 And thanks for reading! 😉 What was the at the top of your favourites list from July? Also, what’s the weather like where you are? We are currently going through an incredibly hot week right now and my new succulents are probably loving it but I for one am not thriving 😅 Let’s get chatting in the comments below and I hope you have a fantastic day! Take care 💕