Hi! 👋 (Compared to all of my other greetings, that sounded a bit clipped but it was actually said in a cool way so try to imagine that and we’ll get along just fine 😂). How are you keeping? 💕 I was going to make this into one of my moment in time posts (1, 2, 3, 4, 5 if you’re interested!) but now I’m in bed at the end of the day writing this and the moments themselves have physically gone so even though that it is impossible to do one of those posts, I still want these memories to stay with me forever so I’mma write about them anyway!

This post is about a series of events that occured within the space of an hour (the Sunday evening just gone by the time you’re reading this but present time as I am writing 💫). Some might see these events as small but they held such a whimsical air that personally they weren’t small at all.

It started out with me just wanting to feel the grass beneath my feet after a day cooped up indoors. In this particular moment the pain had started to subdue so I just went for it, I climbed out of the sitting room window 🍃😂. If you’re wondering why I just didn’t go out of the front back door, it would have alerted the dogs who were peacefully sleeping 😴

Making my way over to the green beneath the setting sun (it was very bright for that time of day approaching 10pm) and artfully dodging puddles I got there in the end and removed my slippers to sink my toes into the grass 🌱 It was COLD but in a nice way. The whole thing being spur of the moment gave a kind of adrenaline rush ⚡ (It’s simple but it’s free 🤷😂).

Then I realized it wouldn’t be as easy to make it back over to the house as I couldn’t exactly stick my now damp feet back into the slippers and the gravel driveway looked like shards of rock interspersed between sand so for a short while I questioned my options. It was kind of like that brainteaser where you have to get across the river and not leave anything behind 😌😂. In the end I half hopped, half sprinted back to the window and clambered back inside (which was nowhere as easy as getting out had been 😂).

Once I was back indoors my mum and I decided it would be a great idea to play a little father’s day prank on dad and trick him into thinking a stranger had gotten onto our land which is becoming a regular occurrence (I wrote about that HERE) so it wasn’t that difficult to believe. I went to him looking out of the window (as I couldn’t keep a straight face 😐😂) telling a story about how I’d seen someone but they’d disappeared. My dad cautiously came over to the window asking about it and quickly checked the camera footage, winding back and there I was prancing about (tbh I thought I’d stood there but the camera told a whole other story 😂). It sounds like the joke was over within a minute but it actually went on for a short while so it was brilliant!

It may have been a light-hearted prank but oh how we laughed (so it was worth it! 😂). I think he thought that had been my plan all along but I’d actually just wanted to be at one with nature originally when I climbed out of that window 🌲😂

Returning back to the front room we became captivated by the magnificent colours that had taken over the sky turning it a deep shade of red with hints of orange, purple and pink. I took a photo and at the exact moment I hit the capture button a friend sent me a picture of her view of the sunset looking the same 😲 It was like that feeling you’re meant to be where you are 💫 My phones camera didn’t pick out the shading very well but it did get a nice reflection in a puddle, here it is: 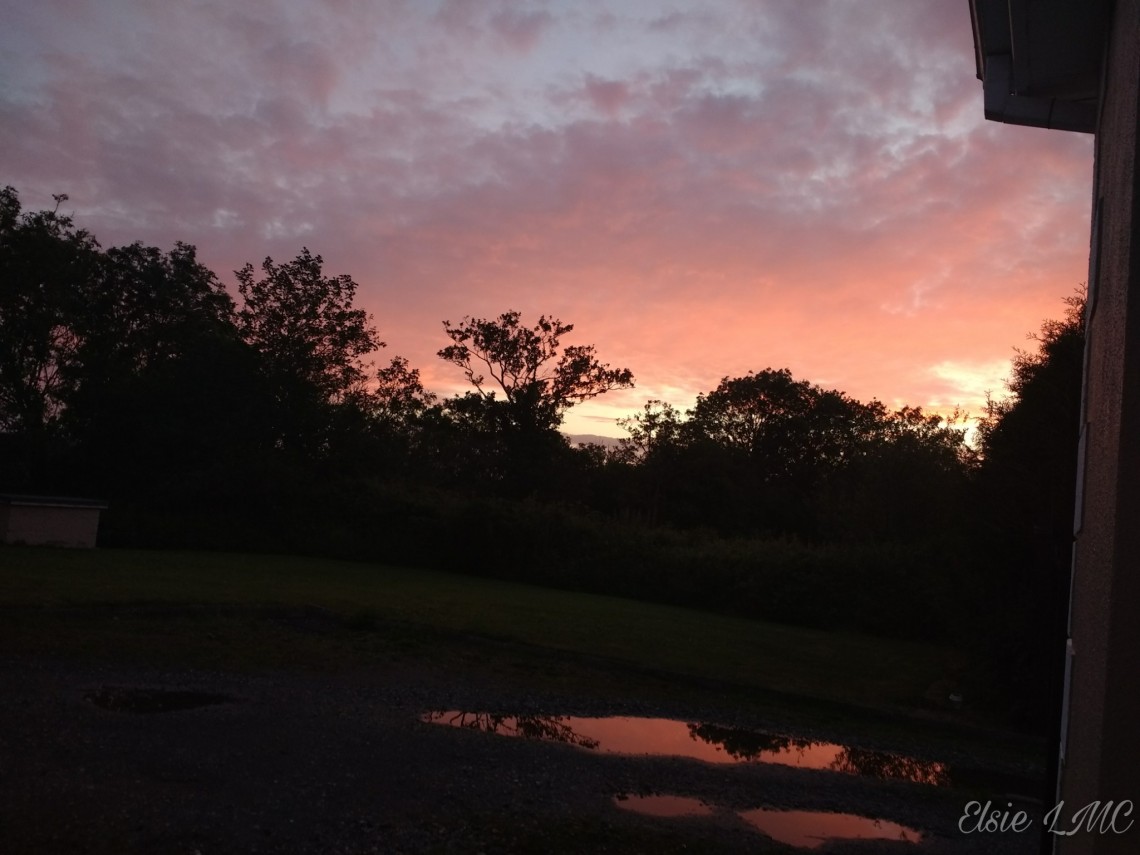 The colourful sky continued halfway round the house as we looked on from another window and I was hit by a wave of nostalgia. The view reminded me of how on the last day of whenever my aunt visits we’ll always go out in the evening to a particular store around this time when all is peaceful in the air and have a nose around. Kind of like a last hurrah 🎉

These trips are so undescribably fun and there’s a sense of just knowing we won’t see eachother for a long time again…..plus shopping when it’s getting dark outside is pretty amazing in itself 😂🛍️ I don’t know why, maybe it’s the stillness of it and how much more interesting everything seems when you usually would be elsewhere/home at that time of day. At most though we’ll come away with some snacks and maybe a good book so nothing crazy. I can’t explain it but these moments are just so exciting to think about let alone go ahead and do. They hold an air of (I’m gonna say that word again for what feels like the millionth time) MAGIC everytime, its like you know you’re going to have that feeling again so you want to go back, I dunno. It really doesn’t take much to make a special memory when you think about it.

It’s given me the drive to maybe have those trips once in a while and not just limit them to once or twice a year because I can’t wait that long! 😂 It’s an enchanting feeling knowing where that magic lies and being able to go towards it with the aim to recreate it. I’ve become obsessed with memories lately so I’m not surprised these ones found their way to me, for once it’s nice to think I can have those times again as then I’m not only focusing on the past, I’m creating a future out of it 😏😂

Going back to the present moment where we took in our surroundings and breathed in the fresh air: in the next field on from us cows were grazing and every now and then you’d here a distant MOO 🐄, beyond that there are rolling hills and the sky turning an off blue as darkness drew closer 🌙….If I’d have looked for it I could have probably found that moon out there too. Often people will tell us that we probably don’t appreciate the magic of all this beauty around us because we are predisposed to it, but that couldn’t be further from the truth.

Thank you for reading! What was the last thing you did that was spur of the moment? Do you like the sunset? Have memories been infiltrating your mind lately too? What are you gonna do about it?? Let me know in the comments below and I hope you have a wonderful day! 💕