Hi everyone! I hope you had a lovely weekend ❤ I wasn’t sure if I’d manage to get a post up today after my weekend of concerts so I’m incredibly happy to be back with you today sharing a small update! Michael Buble was first on Saturday up in Croke Park and we found our way to our seats easily enough with the help of one of the many security guards and were able to look down and see where we had sat for Taylor Swift last month. I’ll admit memories are fading of that first concert as I was a bit out of it 😂 I used up what little energy I went into it with whilst slowly swaying along to his support act Emeli Sande (she was fantastic and a great start to the evening, I had forgotten how many good songs she’s done!).

I had no idea this was Bubles return to the stage after a few years and you could tell how special a moment it was. His voice was fantastic and at one point there was a standoff between him and the musicians playing for him which ended in one of the saxophone players singing (he was brilliant!!). At times whilst he was performing I forgot I was there with the fatigue but I tried to hold on (at one point I thought I was fighting a losing battle when I looked up at the screen and said to myself “ah look there’s Michael Buble!” Like I was after watching the TV and wasn’t at the concert 🙈😂). Buble did funny impressions of Love Island too (it escapes no one! 😂) and had us all laughing. We were surrounded by such lovely people (With all our other concerts people get drunk and waste the moment away ruining it but here everyone was just nice to be around and laugh with whenever bird poop fell down from the sky! 😂).

Sunday was my mum’s birthday (she had a great day 🎉🎂) and we went to see Queen + Adam Lambert in Marlay Park! I won’t go into how much Queen means to us as a family, all you have to know is that there were tears 😂 Before we left I had a nap and it was beautiful 😴😂 It helped as I was still getting over the day before when I’d usually be zapped for weeks but this sleep got me there! (…Well the car got me there but you know what I mean 😂). We arrived whilst The Darkness were performing on stage (but we didn’t miss I Believe In A Thing Called Love!) and we got to our seats on the disabled viewing platform without a hitch (this was a standing concert so we had been prepared for ages!) and we were so close to the stage. As soon as we sat down I was asked if I have a sister in Edinburgh because apparently I’m the spitting image of someone there (or rather she’s the spitting image of me right! Regardless, one of us had to go and it’s not going to be me 😂).

The Boomtown Rats took to the stage and were brilliant (I loved it when they did “Like Clockwork”). Bob Geldof had us all singing along and I Don’t Like Mondays rang true for my sister who is back at college today 😂 When Queen took to the stage with Adam Lambert the crowd went absolutely crazy and we were in a state of shock. There are no words to describe how amazing it was. My two favourite parts were when Radio Gaga played and we all did that thing with our hands in the air and when a video of Freddie came up on the screen alongside Brian as he played the guitar (it was made to look like he was there with him!). The last time we went to a concert as a family was 5 years ago and that was to see Brian May so it was very nostalgic. 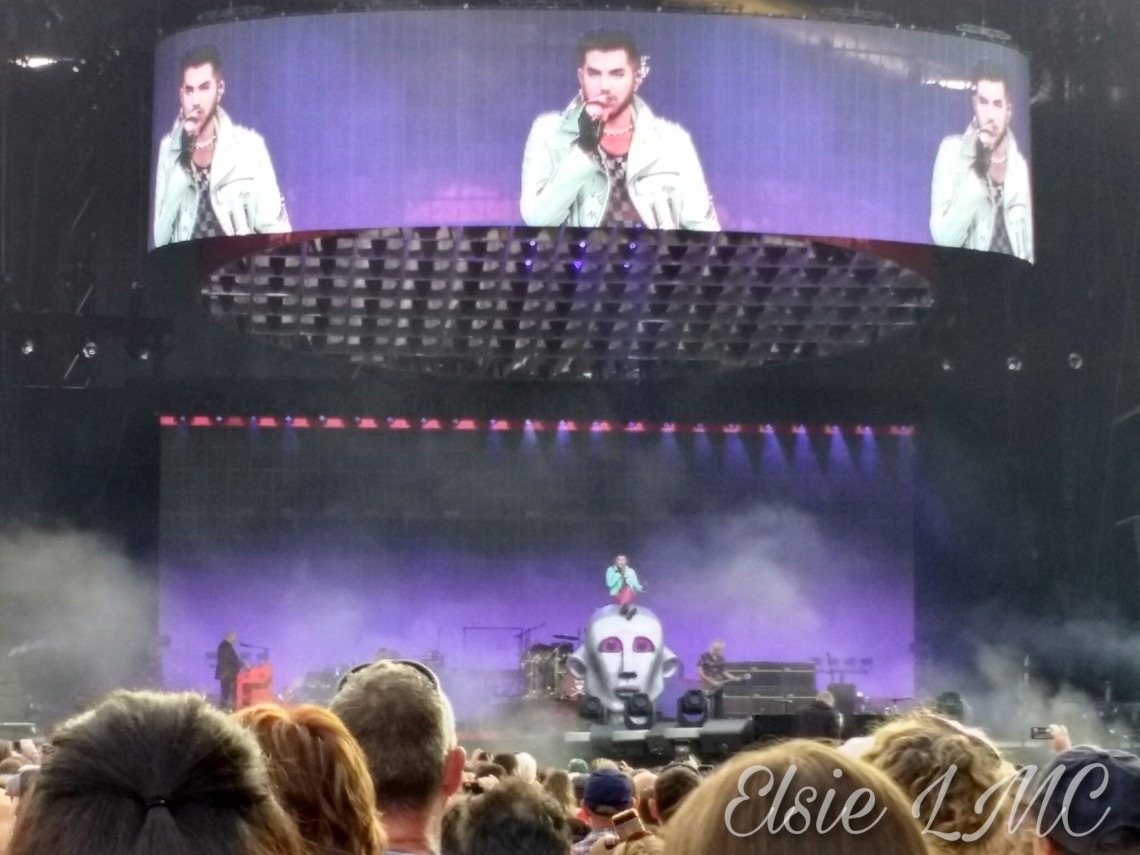 Adam Lambert acknowledged the fact that both John and Freddie weren’t there and that no one could ever replace Freddie which was great because there were a few people saying he thinks he can even though he just said he knows he can’t 🙄 (give him a break! 😂). I bet that if Freddie were still alive and wanted to take breaks whilst live now and then Lambert would be a worthy contender that he’d be proud of because you can tell he appreciates the opportunity and played a huge part in making the show what it was!

Horseflies and wasps were everywhere taking advantage of the situation and we (alongside others on the platform) managed to knock over our drinks whilst swatting them away but the attendants were so lovely dancing as they mopped up and trying to get us all to join in (they wanted you to not be embarrassed and to enjoy yourself and so we did!). We had a magical time and it made us feel like a united front holding hands surrounded by others who are fans of queen too!

At the moment I feel like I can do anything confidence wise (my body is telling me different though 😂) and cope better in busy situations because in both these places no one cares. They don’t stare when you take crazy pictures or sing along out of tune, they’re all there to do the same. I hope this feeling doesn’t fizzle out any time soon. I have flare-ups that will probably last a couple of weeks but I actually don’t mind, if these were the last two concerts I ever saw I’d be one happy human (I shouldn’t say that though as there are still some to come before the year ends 😬 Luckily there’s more than enough time to lose and regain this mindset! 😂).

Thank you for reading! 😉 What is your favourite song from any of the acts mentioned above? Let me know and have a lovely day! ❤